Body-Snatchers, referred to as Snatchers by the United States Department of Defense[1] and also referred to as Bioroids,[2] were a paranormal entity that infiltrated Cuba and intended to menace the entire world at an unknown point in time and in an alternate universe.

At some point, a Body-Snatcher somehow boarded a Soviet-owned commuter jet, and sent it crashing in close proximity to the United States Naval Facility in Cuba. The Body-Snatcher escaped the wreckage before it sunk to the ocean floor, attacked the base at night, and proceeded to take over most of the stationed personnel at the base by morning. The Body-Snatchers' origins were unclear, with it being debated whether they were creatures from another world or otherwise robots built using cutting-edge bionics, and their motives also being unclear. However, the Pentagon called them Snatchers due to their ability to steal human victims and take their place. The private military company Militaires Sans Frontières were hired by the CIA to investigate. The leaders of the MSF, Kazuhira Miller and Big Boss, after being briefed on the situation, proceeded to utilize a secret weapon: Raiden, a cyborg from the distant future, because his near-completely mechanical body rendered him immune to the Body-Snatcher's ability to take him over. Raiden was then dispatched to exterminate all Body-Snatchers, and to neutralize any surviving, non-taken-over personnel at the base. After 8 confirmed Body-Snatchers were wiped out, a huge siege of them ambushed the MSF as they were about to extract Raiden from the area, forcing Raiden and the MSF to fight them off until all were eliminated. Afterwards, Miller revealed that they were unable to determine what they truly were, and hoped they didn't have anything bigger planned, comparing the entire event to "some bad dream."

The Body-Snatchers utilized asexual reproduction to infect people, as evidenced by their ability to take over nearly the entire base with solely one Body-Snatcher. They could also absorb their victims' memories and thus steal their identities. The process was also implied to kill their hosts, leaving them only as shells. Their true forms are very angular to the point of being almost skeletal, with their faces being gaunt and harboring immense eyes. When killed, they release a green aura that consumes the bodies they possessed. When they are injured, they utter a high-pitched, inhuman shriek. Any Body-Snatcher whose host is wounded will bleed out white blood. However, they were incapable of assimilating anything that wasn't organic, which was largely the reason why Raiden, a Cyborg Ninja, was recruited to stop them. Because of their non-human stance, they cannot be tranquilized, and performing CQC on them is of little effect. They also had the ability to brainwash any humans they did not kill to place them under their control.[3] In addition, they could blanket an area they took over with a pollen-like substance.[4]

Body-Snatchers are characters that appears in the "Jamais Vu" mission for Metal Gear Solid V: Ground Zeroes. Their name resembles the titular biomechanical creatures from the Hideo Kojima game Snatcher, which also stole identities from people. Their names and overall nature also resemble that of the body-snatchers from the 1956 science fiction film and 1978 remake Invasion of the Body Snatchers, dealing with an extraterrestrial pod-like race that took over various humans. This mission was added to the game to celebrate the 25th anniversary of the original Snatcher being released for the NEC PC-8801. This is similar to how the "Déjà Vu" mission was added to celebrate the 15th anniversary for Metal Gear Solid being released for the PlayStation. The player, in order to detect them, has to use the binoculars and then target assign them.[5]

The viral marketing promotional event 12 Days of Metal Gear referenced the Snatchers of the Jamais Vu mission with the lyric "11 Snatchers Hiding."

The Body-Snatchers were given an indirect allusion in Metal Gear Solid V: The Phantom Pain in one of several background conversations between various soldiers when visiting Mother Base, when one of them, when expressing wonder as to whether Quiet was even human, speculated that she may have been an alien or some kind of bioroid. In addition, the method in which the body-snatchers took over Cuba in Jamais Vu (causing a Soviet commuter jet to crash near Cuba) was similar to what the third child did via Big Boss awakening from his coma, as well as indirectly causing Volgin's revival as the Man on Fire. 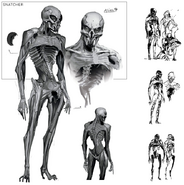 Concept art.
Add a photo to this gallery

Retrieved from "https://metalgear.fandom.com/wiki/Body-Snatcher?oldid=271272"
Community content is available under CC-BY-SA unless otherwise noted.