The Battle Gear was a weapon created by Huey Emmerich in 1984 for the Diamond Dogs. It served a similar purpose that Metal Gear ZEKE did for Militaires Sans Frontières, acting as a special weapon that could be deployed alongside troops in external operations, as well as a deterrent to enemy forces.

After seeing the various Walker Gears being used by the PFs in Africa[1], Kazuhira Miller called Venom Snake back to Mother Base to notify him of Huey's proposal to put the Battle Gear into use. It would be capable of not only turning the tide in standard missions, but also acting as an improved deterrent in terms of preemptive strike capabilities against enemy forces in a war zone. Venom Snake, when first hearing the proposal, privately remarked to Kazuhira Miller that he was having a sense of déjà vu. Despite this, as well as his and Miller's mutual dislike for Huey due to past events, he proceeded to okay the development of Battle Gear, mostly because of similar tech already popping up among various PFs. Ocelot coldly told Huey after the project was signed off that it was the only reason he was exempt from execution before taking his leave.[2]

Upon its completion, Ocelot suggested that they have the Battle Gear participate in various dispatch missions to allow for proper field-testing of its combat capabilities.[3]

According to Emmerich, the Battle Gear was a spin-off of Metal Gear technology (with Ocelot taking some exception to its description as such due to Emmerich having "borrowed" from the Soviets in Costa Rica nine years prior) and had a design allowing for freedom in setups, with its central core unit allowing for quick reconfiguration for varying mission parameters - in other words, it was heavily customizable. The Battle Gear normally possessed a rail gun, a machine gun, and exhibited magnetic levitation technology as a form of transportation. Miller also indicated that its turning radius was superior to that of any tank known to exist, which made it ideal for regional skirmishes.

According to Hideo Kojima's notes in the Piggyback Collector's Edition Guide's art gallery, the Battle Gear, aside from the Combat Deployment Missions, was also originally intended to actually be usable in the game's open world. However, it was removed because during test runs for the game, its presence disrupted the gameplay balance.

An audio file of Ocelot detailing the use of Battle Gear in combat has been found while data mining the PC version of Metal Gear Solid V: The Phantom Pain: "The Battle Gear is an armored weapon developed to take on hostile bipedal weapon systems. You can alter its maneuverability by changing its posture. In travel mode, it's as nimble as a horse, whereas in fire mode you can move while keeping an eye on the area in front of you. It's armed with a railgun and a heavy machinegun. If you like, we can look into adding other weapons too".[4] In addition, dummied data from the game has been found which presumably refers to upgrades to the Battle Gear: known names are HYBRID PT SYSTEM; AT-DRIVE MODULE; IT-CONTROL UNIT; BTG RAIL-GUN; BTG GATLING-30mm; BTG POWER-ARM; BTG H-MISSILE; and BTG P-WAVE SHIELD.[5][6]

Battle Gear possessed a small AI head module with a single optical lens, similar to the one present on D-Walker.

If the player visits Huey's lab after development begins, they will be treated to a cutscene which shows Huey putting the head module on the body. Unlike most other cutscenes on Mother Base, the player does not get a notification of this development via either Ocelot or Miller and thus get redirected to Mother Base, meaning the player has to go out of their way to see the scene.[7] 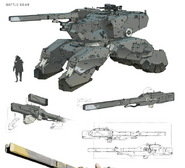 Retrieved from "https://metalgear.fandom.com/wiki/Battle_Gear?oldid=273222"
Community content is available under CC-BY-SA unless otherwise noted.